The Salish tribes have been there for thousands of years it is said.  In 1792, explorer George Vancouver felt deceived thinking Whidbey Island was a peninsula.  It was an island. The name Deception Pass was born. Over the years, the area has seen illegal Chinese immigrants thrown overboard while tied up in burlap bags.  It has seen convicted murderers cut rock that was then sent to the Seattle waterfront. In 1935, the pass between Whidbey Island and nearby Fidalgo Island was connected by a bridge. The Daughters of the American Revolution unveiled a stone mounted plaque at the opening ceremony of the Deception Pass Bridge.  The plaque is located partway across the bridge on a small island named Pass Island. 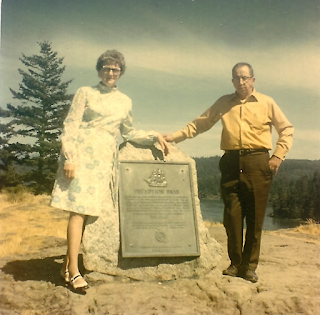 I would bet actual dollars that Nanny barked something similar to that at Papa right before this picture was taken.

I know how the rest of their many years were filled with life.  I know the family they had surrounding them.  I know about the good stuff.  I know about the bad stuff. I know about the really bad stuff.  Looking back, at the big picture, none of the details about that day mattered much.  What really seems to have mattered is what came next.   No matter what life threw at them, by God, they just kept on going.   That’s what I see when I look at that picture.

“Drew!  Hurry up and get over here.  We’re going to take a picture.” 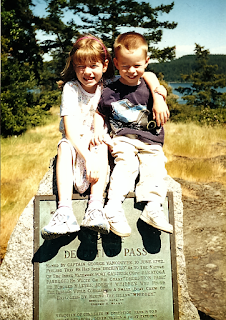 I would bet actual dollars my daughter said that to my son right before this picture was taken.

I do know what year that picture was taken, decades after Nanny and Papa's picture, and I do know why we were there.  I know why he’s wearing the monster truck shirt and why he was grabbing on to her arm. I remember being terrified walking partway across the bridge, 185 feet above the water, the cars whizzing by so close I could have touched them.  I held the boy’s hand so tightly I could have crushed his tiny bones.

When photographer Lisa Dills first posted this picture of Deception Pass she mentioned that she had missed the actual sunset under the bridge but managed to capture some boat activity just shortly afterwards. 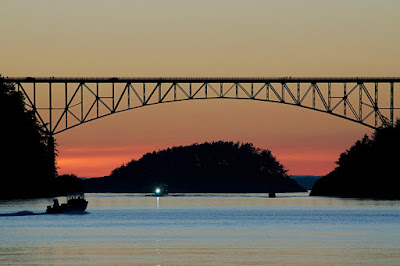 I suppose you can’t see the full sunset in this picture. But you can see what came next.

No, you can’t see any of those things in that picture.

But I do. I see all of that and more.

I see what came next.

Please go take a look at some of the other pictures Lisa Dills has taken.  She is a phenomenal photographer.  You won't be sorry. http://www.onedayatatimeinphotos.org/

Here's a short little video of Deception Pass.   Watch it and I guarantee you'll say, "Wow!  That place is sure is pretty."
https://www.youtube.com/watch?v=8-Hh3n0UwpI

Great thoughts Melissa! You are such a clever writer. I am looking forward to reading about all of your "nexts"! I imagine your new looking lens gives you such a different and better perspective of every situation, good and bad, these days. Keep up your good fight! 😍

Love this one! Lisa's pictures are exceptional and so glad you included the link.

Kinda tearing up a bit. Such a pretty place. Good blog.