There was no way out.

My God, I thought. One wrong move and bad things could happen.

It was six thirty in the morning when he painted a bird on his face.

He dressed carefully, layer by layer, each piece colorfully cementing his commitment to the cause.  As he walked to the train station he had to take a deep breath.  He needed some way to control the excitement bubbling in his blood.

When he arrived downtown it was a sea of blue and green as far as he could see.

It was no surprise.
He knew they would show up.

The Seahawk 12s always showed up. 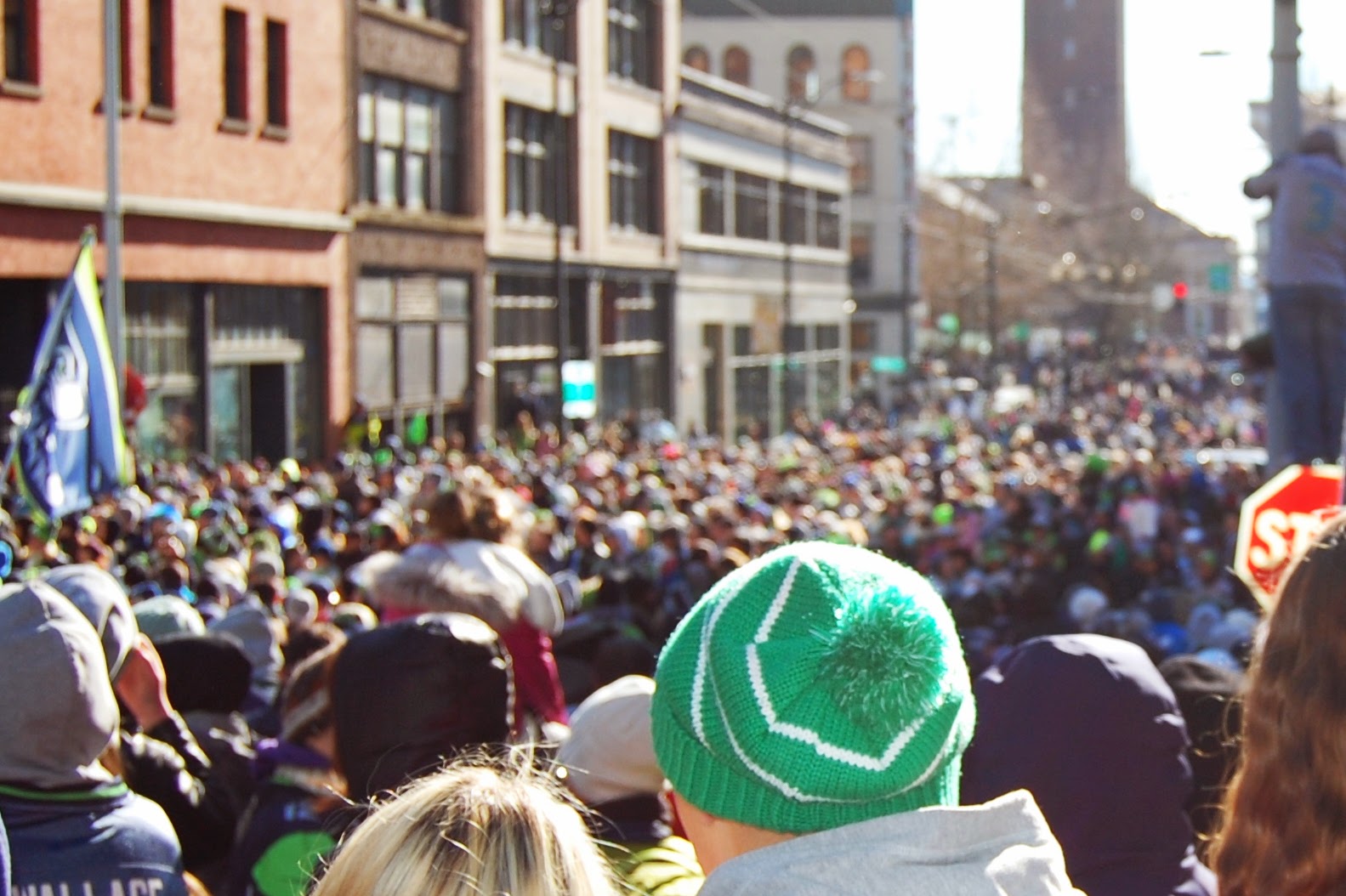 He waited a long time for the team to come by.  But when they did he yelled as loud as he ever had.  He raised his arms and chanted with the crowd. His heart was pounding.  He thought this might be the greatest moment of his life.

He knew it was just a game.  But by God, these boys, these men, had managed to make him deliriously happy.  They had won the Superbowl.   He was sure he’d remember it forever.

The crush of people began as soon as the parade was over.  Within minutes the husband, the teenage boy and I were seized and engulfed. The pack tightened.  The choking crowd swayed as one.  The gridlocked individual was powerless as thousands of bodies pressed up hard and tight against each other.  The initially intoxicating and exhilarating experience of being a part of it all had taken a turn toward the frightening and alarming.

It was, without question, impossible to move.

The crush of 12s turned their heads in real concern and looked toward the man with the bird painted on his face.

“Come on people! “ he firmly roared. “We are going to make some room!  We’ve got to get these little children out of here!"

Impossibly, the 12s pushed back and parted the sea of congestion.  Impossibly, a space was created. Impossibly a mother holding a baby and pushing a stroller with a toddler in it nervously made her way through the crowd.

The man with the bird painted on his face yelled again, “Good job people! Good job!   We don’t want anyone getting hurt-especially the little children.”

And with that the crowd closed in on each other.

Again, it was impossible to move.

Most of what I knew about Bruce Springsteen came from his Born in the USA years and the fact that my high school choir teacher was one of his biggest fans.

I have just finished the book Bruce by Peter Ames Carlin. 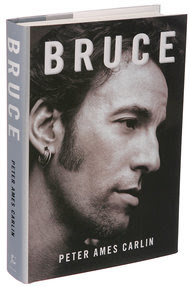 A fairly honest account of Bruce's life and music, this book has caused me to become one of the Boss' obsessive superfans.  At least for now.  It's worth checking out, for sure.  It's no surprise he's still creating and touring. I recommend having some of his albums around while you are reading. Listening to the music the author is describing helped in understanding the book, and Bruce.

I've become particularly fond of his early music, something I was fairly unfamiliar with before reading the book.

One of my new favorites:   Prove It All Night

You Should Have Been Looking At My Boots

You saw me pressing the avocados trying to find the perfect one.  You saw middle aged and mom jeans and the search for healthy monounsaturated fats.

U shoulda been lookin’ at mah boots.

But no.  You saw the avocados.

You saw the brown rice and the Good Housekeeping and the fiber yogurt. You saw the coupons and the chamomile tea and the mundane.

You should have been looking at my boots.

I felt like a joke when I put them on.  He assured me I didn’t look like a skinhead at all.

I was unsure and ready to walk out the door.  He was convinced and remained admirably committed to his ultimate goal.

He grabbed me with his eyes, smiled in a particularly charming way and slowly cooed,

They will be awesome.

You will be transformed.

The hipster was right.  The dream boots were a nightmare.  My feet were utterly overwhelmed with agony.  The Internet promised that my pedi-torture would eventually lead to a euphoric nirvana.  I didn’t know if I was strong enough to make it to that promised land.

The agony eventually morphed into mere pain, traveled through mildly uncomfortable and landed solidly in the hipster’s predicted vision about my boots.

When I put on my boots that morning I became a rock star.  I became a poet.  I was a rebel.  I was a visionary.  I had secrets and darkness and a riot in my brain.  I had insight and intensity and inspiration in my blood.  My boots and I stormed into the store that day screaming at you.  We were bold and fearless and ready to conquer.

Yeah, you should have been looking at my boots.

You would have seen all that.

But no.  You saw avocados.

The New York Times believes that Tenth of December by George Saunders is the best book you will read this year. 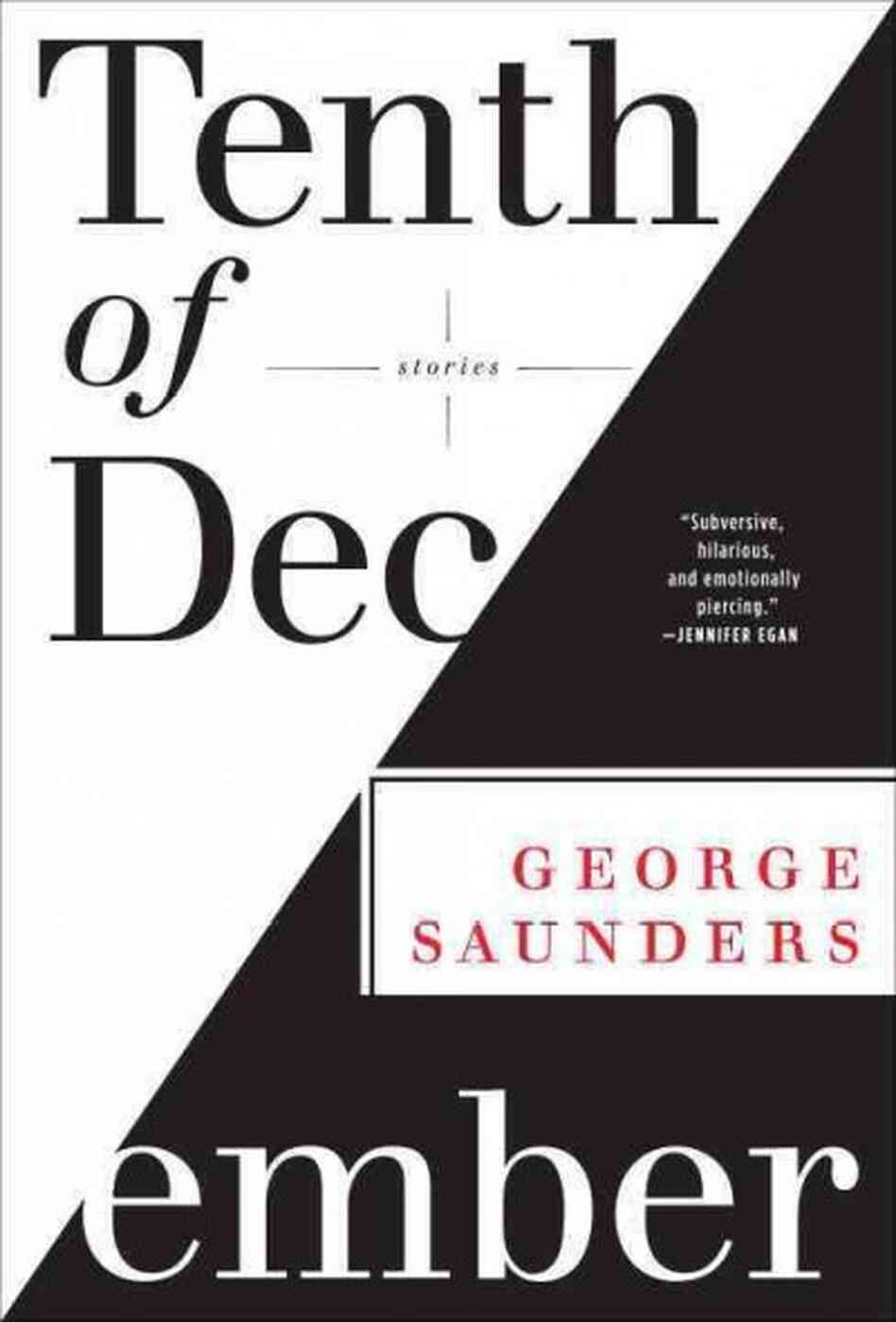 This collection of short stories is different.  It is provocative.   It will make you question.  It will make you think.  It will give you some serious book withdrawal when you are done.   You really should check it out.
Posted by Melissa at 10:28 AM 3 comments: