If you were to remind me that it’s been 5 years, 3 months and 3 days since my mother died, I would swear that somehow you were wrong.


And then I would change the subject.

But then along came Gracie. 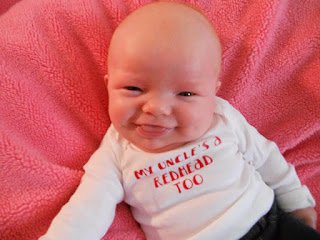 She is beautiful and innocent and every part of her is good.


Somehow fate has determined that my mother would never meet her 5th grandchild. Gracie would never sit in her arms, look up at her face and giggle.  Granny would have loved Gracie.


It all seemed so incredibly unfair. 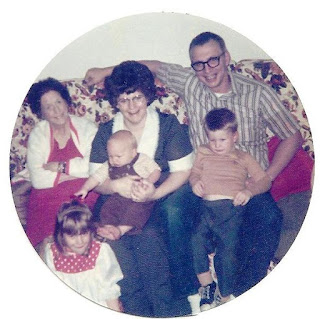 It was either Thanksgiving or Christmas, 1975.  The picture was taken at the Bernice Street house.  We were all sitting on the orange and harvest gold flowered couch.  Grandpa had that thin short sleeve button up shirt on with those black rimmed glasses.  Uncle Steven had a freckled face and sat on Grandpa’s lap in wearing Toughskin jeans.  I was missing my front tooth and had hair that flipped up at the ends.  Great Grandma Titus sat on the edge wearing an oversized sweater draped over her best housecoat.  She crossed her hands across her chest in the same way I’ve seen every female in our family do.  And Granny sat on that couch, right in the middle, wearing a matching two piece black and white polka dot polyester ensemble.  Her hair was done. She was smiling.  On her lap was my brother, Gracie’s dad.   He was 7 or 8 months old.  He was wearing brown overalls and didn’t have any socks on.  His hand reached for the ribbon in my hair, his face full of concentration.  It is the same face of concentration I saw in Gracie’s Facebook video.


The chaos of the Christmas shopping crowds swirled around me as I looked at wrapping paper in Target a few weeks ago.  I mindlessly debated what I should buy when I was tapped on the shoulder.  I turned to find no one there.  I turned back to the wrapping paper.  There was yelling in my ear.  “I said turn around!”  But it was a quiet yell, somehow.  I knew it was only in my head.  I turned around to face the wall of Christmas ornaments behind me.  They were almost completely sold out.  There were 4 Disney ornaments off to the far left side.  And there was one ornament left smack dab in the middle of the display, all by itself.  It was an angel.  Carved into the ornament was, “Guardian Angel”.

I don’t have any proof that I’m not crazy.


I don’t have any proof that angels exist.


I can’t explain who spoke in my ear and said, “It’s for Gracie.”   But without one single ounce of doubt, I know I heard them.


I have no way to explain how in an instant, in the midst of a crowd of Target Christmas shoppers, all was peaceful and all was good.

But without one single ounce of doubt, I know that it was.

And if you were lucky, I might even tell you a little story about a guardian angel.

Of course, if you haven't seen one of the best angel movies ever, I strongly encourage you to watch It's a Wonderful Life.  With Jimmy Stewart and Donna Reed in the lead roles, it's a classic everyone should see at least once.
Posted by Melissa at 2:54 PM

You're right - Your mom would have loved to have Gracie in her arms! Nothing like two "book end" granddaughters - and both beautiful.

Best one ever. I'm wiping a few tears. keep it up!

I very much enjoyed this. Even though I cried. My mother died a few years ago and all of this really hit home with me. I swear mine comes to me in dreams. Thank you for a wonderful story.