I was 11 years old on the day things went so horribly wrong.

It was supposed to go in the basket.

After the game, instead celebrating our win with my teammates, I made a red faced escape from the Jefferson Elementary School gym. Walking quickly with my head down I attempted to hide my tears and my embarrassment from my family, from my teammates and especially, from the lady with the sore head.

In 1980, we played basketball because it was fun. And we played basketball because our friends did. And we laughed when we played. We practiced shooting free throws in our driveway at slumber parties until it got dark. The floor burns and bruises on our knees came from the rubber gym floor in the school’s cinderblock multipurpose room where our team practiced. Parents watched games from worn wooden steps in front of the stage at the end of the room. They talked to each other and not to the ref. There was always one problem mother who pushed her daughter to be a superstar. Some of us would be lucky enough to play in high school, but we certainly didn’t think about it when we were 11 and 12. We wore short shorts with white piping and long tube stocks that reached our knees and had colored stripes at the top. When basketball season was over we dug our mitts out from the back of the closet and started playing softball. In 1980 we played softball because it was fun.

But in 2009 that just might be where the similarities end. In 2009, many of the girls play for the exposure, they play for the fame and they play for a college scholarship. They practice free throws at the Saturday open gym on the high school court after an hour in the weight room and a 3 mile conditioning run. Floor burns and bruises on knees come from polished hardwood floors with a painted mascot in the middle. Parents watch games from 20 rows up in the metal bleachers that have seats in coordinating school colors. The ref can still hear them complain. There might be one or two parents who don’t push their daughters to be superstars--maybe. In 2009, girls wear baggy, shiny shorts that reach to their knees, with Under Armour compression shorts underneath, and sleeveless jerseys with technologically advanced moisture wicking capabilities. With club play, competitive teams and year round tournaments, in addition to weekly training, basketball season is never over.

After a particularly hard practice last week the teenager limped into the house exhausted and bruised and bleeding. She relayed how she was yelled at by a teammate, fouled to the ground by the 6 ft tall girl and ran lines until she could barely walk. And despite her improving skills, she was certain she wasn’t going to get much playing time this season.

“Honey, “I asked her, “Why are you even playing basketball? It sounds like you are miserable.”

Without hesitation, she turned to me and grinned wide. “Are you kidding, mom? Basketball is great! I’m playing because it is fun. ”


At my mother’s funeral last year, a woman walked up to me and enveloped me in a hug. She offered her condolences. I inquired about her two girls, twins, which I had gone to school with from 2nd grade through our senior year in high school. She mentioned that one girl now had a son who was playing basketball. As we reminisced about the basketball teams her girls and I were on so many years ago, I asked her if she remembered the incident.

“It was the worst air ball in history. “ I told her. “I shot the ball up and over the backboard and it flew through the air into the area where the parents were sitting. My ball ended up hitting you right on your head. Your head was turned at the time so the ball caught you by surprise. You stood up and yelled out in pain. The whole gym saw. I was so embarrassed. I’ve never forgotten it. “

She laughed. “Oh for goodness sakes. I don’t remember that at all! Boy those were good times though, weren’t they? Those basketball games were great. My girls had so much fun. Didn’t you?” 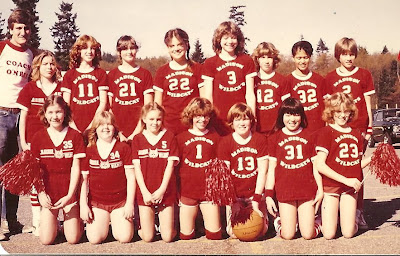 I was 11 years old on the day I shot that air ball. I was 38 years old when I told the teenager about it. She laughed out loud. "That's hilarious mom. But, if it bothered you so much, why did you keep on playing?"

Without hesitation, I answered. "Because basketball was great, honey. I kept playing because it was fun."

The Afghan, by Frederick Forsyth is a roller coaster of a read. This book about a planned Al Qaeda attack and an imbedded British spy was shocking, thrilling and suspenseful. The ending was a bit flat....but the book is still an escape and well worth checking out.
Posted by Melissa at 2:04 PM

Email ThisBlogThis!Share to TwitterShare to FacebookShare to Pinterest
Labels: basketball, the afghan

I've never forgotten my airball, during the championship game, AT THE FOUL LINE, either. Funny how something so silly sticks with us.

Which one are you in the photo? I'm guessing the cute one front and center-#1.

That's a classic picture. I recognize some, but not all the players.

Those were the days. I can't stand the fact that kids need to specialize in a sport by 4th grade in order to have a chance to play in high school. Not to mention the physical issues of overtraining and one sport training that are coming to light in recent years. It's sad, really.

You are such a good Mom. Thanks for sharing the stories of how things never, and always, change. :)