I Blame the Snow

When I sliced open my finger the blood made vibrant red designs in the piles of white snow in my yard. The snow had seemed never ending and never melting. The snow dominated every newscast. The snow caused panicked people to fill up their freezers with food. The snow caused 3 week’s worth of garbage and recycling to pile up in my neighborhood. It was because of the snow that I was attempting to 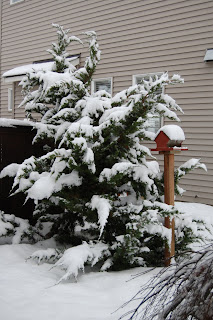 make more room in my overflowing recycling bin. It was because of the snow that I pushed the contents down as far as I could and sliced my finger on that hidden can lid. I blame the snow.

We were living in Idaho when the teenager was 2 months old. The snow was expected and the wind was always blowing. The temperature outside was 2 degrees. I felt that this was the perfect time to plan a Christmas party for 100 people. I bundled the infant teenager and headed to Costco to buy supplies. As I left the store I learned for the first time that it is impossible to push a fully loaded cart through a snow covered parking lot. The infant teenager began to cry as the wind picked up. I tried to put my mitten on but it was quickly blown away, landing underneath a car. Standing there in that parking lot, my lack of experience with screaming infants and foul weather shopping cart maneuvering and frostbitten extremities began to overwhelm me. It was because of the snow that I began to panic. I blamed the snow.

We were living in New Hampshire when we rented the colonial house with the super long driveway. Life was full of quaintness and history and winding country roads lined with vibrant orange and red and yellow. And then darkness overtook the world and we began our winter of Nor’easter assaults and the accompanying perpetual dumping of snow. 6 inches of snow was entertaining. 12 inches of snow made the landscape stunningly beautiful. 24 inches of snow in the yard was something to brag about. The snow continued to pile up, however, and soon our landlord stopped using the plow on the front end of his pickup truck to clear our driveway. 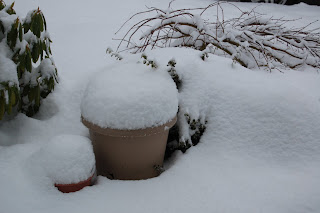 She was not a young woman when she flew through the air in her Volkswagen. She was, however, a stubborn woman full of spunk and determination. Her ranch in the rural foothills of the Colorado Rockies had seen plenty of winter snow since she moved there in the 1970’s. Every winter, the plow would trudge up the mountain pushing mounds of snow to the side of the road, blocking the end of her long, steep driveway. She didn’t feel the need to shovel the mound out of her way. The most logical way to deal with it, she felt, was to simply plow right through the snow mound with her car. Year after year the dry, fluffy snow yielded to the woman and her car and she proceeded out of her driveway unchallenged.

One year however, the woman pushed the snow with the front end of her car and found the snow pushing back. This year, the snow was stronger. She backed up a little further than usual and rammed the snow a little harder. The snow didn’t budge. Back and forth she went with her car, compacting the front half of the mound as she attempted to push through to the road. Frustrated with the stubborn mound, the woman backed her car all the way up to the top of her driveway. She steadied both hands on the wheel and proceeded to send the Volkswagen hurling down the snow covered hill.

The now compacted mound at the bottom of the hill provided the perfect launching pad for the Volkswagen. The woman tightened her grip on the steering wheel as the car flew up and over the mound. Her eyes grew bigger as she continued to fly over the road. Her heart began to beat faster as she cleared not only the mound on the other side of the road but also found herself sailing over the pasture fence across the road as well. The Volkswagen finally came to a stop in the middle of a pristine, snow covered pasture.

When the tow truck driver arrived he appeared confused. “What’s the matter?” the impatient woman asked him. “Can’t you get my car out of there?”

“Oh, I can get you out of there.” the perplexed tow truck driver answered, shaking his head. “What I don’t understand, lady, is….who… who…. put the fence back up?”

“No one put that fence back up!” the woman barked.

Still baffled by the situation, the tow truck driver asked, “Well… lady… if you didn’t slide off the road and through that fence into that field, then how did you get there?”

The woman turned the driver around and pointed to her steep driveway across the road. “I came from over there.” she pointed with a hint of pride.

“It’s because of this darned heavy snow that my car ended up here in this pasture!” she explained to the tow truck driver.


She blamed the snow.

It is because of the snow that I made this chili the other day. It tasted super good. I blame the snow.

Saute a chopped onion, 3 chopped celery stalks, 3 chopped carrots, some chopped green or red pepper, if you have some, and a bunch of garlic in spray or olive oil. Add one small can of mild chilis or jalapenos, depending on how brave you are. Add at least one teaspoon of ground cumin, 2 teaspoons of chili powder, 1/2 teaspoon of coriander, 1 teaspoon paprika, and a few dashes of cayenne pepper. (I have added up to double the seasoning, usually going heavy on the cumin.) Stir well and add at least 30 ounces of chicken broth and 2 quarts of water. (I've made it with all chicken broth before.) Add 3 or 4 16 ounce cans of rinsed beans. (white, navy, pinto, black, cannelini etc--the recipe calls for white or navy but I change it around a lot) Simmer for awhile-at least 1/2 hour and up to 1 1/2 hours. Near the end, stir in some chopped cooked chicken breast and a few dollups of sour cream. (For a really creamy texture use cream cheese instead of sour cream.) Season with a bit of salt and pepper and stir. Ladle into bowls and garnish with a bit of cilantro if your family will let you and some grated jack cheese.
Posted by Melissa at 1:38 PM

Who flew the VW??

This is the funniest thing I've ever read!

Blood from your cut caused by hardship, fear in Idaho, anger in New Hampshire, and heartfelt human emotion in Colorado with an exciting dramatic conclusion, requiring a stunt double, of course! This blog should be made into a movie! Except...the Volkswagen would definitely have to be recast with a much cooler car.

Did the VW work after it was towed? If so then VW should use that for a commercial to prove how fabulous and sturdy their cars are!