I Want a Do-Over

I’d like to go back in my life and do a few things over again. I’m not talking about anything large and life changing. But there are a few small incidents I wish had gone another way. If I had it to “do-over” again:

I wouldn’t have peeked out my window when I was 5. My aunts and uncles were secretly assembling a swing set for my birthday the next day. I was supposed to be asleep. It would have been the greatest surprise.

I would have found some paper. I wouldn’t have written on the freshly painted wall with permanent black marker 10 minutes before potential buyers were showing up to view our house.

I would have gone down the slide instead. I would not have gone across those wet monkey bars and fallen onto the asphalt below breaking both of my arms at the same time. 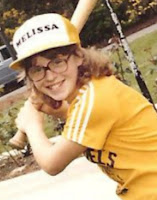 I would settle for a triple. In an attempt to hit an in the park homerun during my 6th grade softball game, I aggressively and without care, mowed over the catcher for the other team when she tried to tag me out at home plate. Did I mention she was my best friend at the time?

I would have read more books. I temporarily stopped reading books in the 7th and 8th grade in order to focus all of my time and energy on being head over heels in love with a boy.

I would have taken the back roads. I held up traffic in the busiest intersection in town, through three light cycles,

during rush hour, two days after receiving my license, because I couldn’t successfully let the clutch out of my 1973 baby blue, Ford Pinto without killing the engine. That was my first experience with road rage. I was on the receiving end.

I would have washed dishes by hand. I would not put liquid dish soap instead of dishwasher detergent into my aunt’s dishwasher. A truly shocking amount of bubbles soon poured forth from the sides of the running dishwasher and covered the kitchen floor.

I would have parked on the street. I parked in a friend’s driveway once. It sloped steeply downhill toward her garage doors. It was raining when I went to leave. I’m 100% sure I put the car in reverse. Or at least 98% sure. I stepped on the gas. The car went forward. I put on the brakes. The car still moved forward, sliding into and bending the garage door. 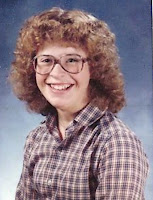 I would have asked for Farrah Fawcett hair instead. My number one incident that I would do-over if I had the chance is the dreaded 7th grade perm. I would ask my hairdresser exactly what she meant by “soft, loose and relaxed” curls.

Check This Out!
Snack of the Week: Triscuits dipped in ranch dressing. Addictive.
Posted by Melissa at 11:02 AM