"Has anybody seen the butter?" 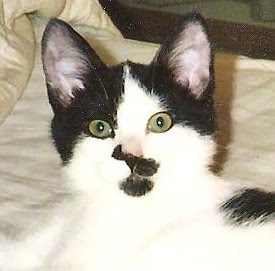 I've been thinking for a few weeks now how to begin my blog. I've thrown out many ideas. They weren't big enough. They weren't smart enough. They weren't funny enough. So I wrote nothing. I was waiting for the perfect story. Then a few days ago my cat figured out how to open the door to the kitchen cabinet. He climbed in the cabinet and up onto the second shelf. He somehow found the bowl that was holding a new stick of butter. When I found him 15 minutes later, he was on the other side of the house. I managed to find the route he took from the kitchen by following the butter trail he left on my carpet. I saw that he had only half a stick left. His whiskers were thick and yellow. His face was a greasy mess. His paws were leaving butter prints on the floor. He was in a gluttonous coma in butter heaven. I was furious, of course. I attempted to wipe him up and then put him in a "time-out". As I was cleaning the floor and listening to him howl in protest from his kitty jail cell, the whole incident became very funny. I was on my hands and knees cleaning butter from my well worn carpet that my cat had stolen from the shut and presumably kitty safe kitchen cabinet, and then proceeded to drag through 5 rooms of my house to where he felt safe and relaxed enough to sit down and eat half of the stick before he was caught red pawed with his nose buried in butter. How could that not be funny?

A few days later I was in Babies R Us shopping for items to "baby proof" my kitchen cabinets. The sales lady who approached me asked me how old my baby was. I told her he was 10 months old. She told me it was the perfect time to be babyproofing as my baby was now most likely becoming quite mobile. It was then that my 7 year old son piped up and said, "Oh he's mobile all right! He's our cat!"

I decided then that I didn't need to wait for a "big" story to start my blog. It is the stuff that happens every day that often make the best stories. So I hope you will join me as I explore the stories that happen every day. And I promise, they will only be Slightly Exaggerated.

Today I am highly recommending the book "The Bookseller of Kabul" by Asne Seierstad. It gives a great post 9/11 account of life in Kabul and Afghanistan in general.

And that, of course, is why dogs are so much better!

Melissa, So happy you found me. Have you checked out tiffanybluethongers.com? Do you have a chapter in your town? Here is a good cat story, Gwedo, our beloved cat for at least 16 years had to be put down. The vet came to our house and we said goodbye. We had him creamated and the vet took his remains and said she would drop off his "urn" in a few days. Well, I took the kids to Boston last week for winter break and John stayed home because he is an overworked and under paid Cornell Professor. We arrived home after a wonderful trip and my husband handed me a round container with a suspiscious white powder in it. He said it was just left on our front porch with no note. He sniffed it, hoping it wasn't anthrax powder, touched it and came close to tasting it. He decided not to do that and waited for us to get back from our trip. At first I couldn't figure out what it was and then it came to me, GWEDO'S ASHES! He was a well loved cat! Keep in touch. Beth