A Doggie Took Me Down

I think the blog is now set up so anyone can comment. So let's hear it! Comment away.

I was attacked by a dog the other day. It was a frightening experience. It happened so fast there was nothing I could do to stop it. I was running in my neighborhood when I saw a woman with two young children approaching. She was focused on the youngest child who was throwing a tantrum on the sidewalk. The other child, a boy around 6 years old, had a dog on a leash. As they approached, I slowed down and offered my hand for the dog to smell. The dog was extremely excited to see me, almost agitated. I could sense that it was a friendly excitement. It soon became apparent, however, that the dog was not well trained and the boy was not at all capable of controlling it. The overzealous dog jumped up and into me. He was not purposefully trying to hurt me, yet his front paws repeatedly pawed my legs. One paw caught the cord of my MP3 player and ripped the ear buds right out of my ears. Soon the cord was also ripped right out of the player. I was completely taken aback. I began to feel overwhelmed. The dog then pawed the MP3 player right out of the carrying case that was in my hand. I reached down to try and pick up my things. In his continued excitement to say hello the dog clawed a large scratch down my arm. I stood up and his front paws were right back on the front of my thighs. It was almost if he was trying to climb me. I felt sharp pain in my thighs. His very long and very sharp claws had gone right through my pants and punctured my legs twice. I could feel the blood running down my leg. About this time the mother had the youngest child under control and looked up to see the older boy struggling. She instructed the boy to “get moving” so they wouldn’t be late for school. She looked at me, apparently oblivious to the “friendly”, aggressive greeting her out of control dog had just presented me with and said, “I’m so sorry if he got in your way.” And then they moved on.

I put my MP3 player back together. Despite being injured and a bit shaken, I decided to finish my run. When I got home I inspected the puncture wounds on my leg. As I went to get the first aid kit I vowed that if I ever saw that little white cockapoo dog ever again, I was going to cross the street. 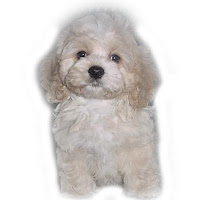 Check This Out!
I am having book withdrawal today after finishing The Caliph's House, by Tahir Shah last night. In this wild, utterly astounding and truly unusual travel/adventure book, Shah moves his young family from London to Casablanca, Morocco. This book was one of Time magazine's 10 Best Books of 2006 and it deserves it. Shah is my new favorite author. I've read 4 of his books so far. It won't be the last time you hear me sing his praises. www.tahirshah.com
Posted by Melissa at 1:58 PM

I am not quite sure who's a greater evil - the hairdresser from yesterday's blog or the dog?!

Let me know if you see the dog around the neighborhood. I'll sic Jager on it :-) Keep up the good work.