I felt like I was reading my own medical chart.  But it wasn’t my chart.  It was hers.  They told me to take those same drugs too.

We were diagnosed with breast cancer at the same age.  We didn’t have the same kind of breast cancer.  The engines driving their growth took a different fuel.  Yet our choices for treatment, decades apart in medical advancement, were remarkably similar.  We both gambled. We both prayed.
She lived.  16 ½ more years she lived.

And then it was 2007 and she was diagnosed with ovarian cancer.  I looked through her papers from that time.   It all starts out so innocently.   “Patient presents as a very pleasant female who is being seen for further evaluation……”   There’s a little pain, a symptom.  There’s always a reason for it.   It’s always something else.

And then it’s not something else.

I looked through her papers and recognized how it began.  My ovarian ultrasound told me I was premenopausal.   Hers told her that, simply, she was postmenopausal.   My CT scan couldn’t find any reason why my hip should be hurting.  But hers, only one week after her clear ultrasound, declared the finding of multiple masses consistent with metastatic disease of uncertain etiology.

I looked through her papers and saw the system. I knew the insurance codes in her bills.  I knew eligible coverage limits and abnormal biopsy results and taxane side effects.  I read about the nutritionist's recommendations.  I saw how long it takes to have a walker delivered.  I found out about the price of morphine.   Her papers showed me the progression.   Her papers told me how it ended. 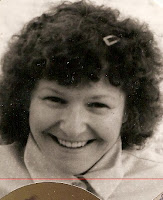 It’s clear, my oncologist said in 2015, there is something going on here.  Every genetic test he ordered, every one available, said otherwise.   My fancy genetics doctor is certain there’s a genetic component we haven’t found yet, one we don’t know how to test for yet.  After all, he said, when your mom got her breast cancer, we didn’t even know your type of breast cancer existed.  Years later, by the time your mom got ovarian cancer, we finally knew about your type of breast cancer.  Every year there’s progress, he said.  Every year.

It took me almost an hour but I shredded her papers.  Oh, I kept a few of the important ones. I kept the insurance certificate.  It was required by federal law, after all.

It felt good.  It felt like progress.
Posted by Melissa at 5:40 PM 3 comments:

When you’ve had a little bit of cancer you feel obligated to be grateful for everything good that comes after that fateful diagnosis day.  No whining allowed….because how wonderful it is to have another day to be alive, to be with your family, to enjoy all the beauty and joy that life on this earth has to offer.

I confess, it has been almost 9 months since my last diagnosis of breast cancer and I fear I am about to whine.

It is nearly Valentine’s Day. I love the husband dearly.  He is perfect for me.  He is patient, kind, tolerant and occasionally even appreciative of all the good and bad that makes me, me.  We have been together for long enough that when I try and remember how long we’ve been dating or married I need 7 hands full of fingers to count it out.  And while it’s true, I am grateful for the husband, I’m just not sure he’s worth 9 bucks.

Yet, I stood there in front of the aisle of cards and knew without a doubt, I was not my father.  Picking out greeting cards is hard.  None of the cards spoke to me.  None of the cards had anything to do with me and the husband.  Most of the cards didn’t even mention who was responsible for cleaning out the cat litter, why he and the teenage boy should cut back on the shoot ‘em up video games or how I think he needs to see a hearing specialist.  Combined with, of course, with all the good parts of our relationship and how wonderful he is.  The cards I looked at were all unrealistic sunsets and dreamy visions and unending sappy superlative proclamations of love and devotion using words found only in a thesaurus.

Nevertheless, I held my final choice in my hands.  It was lacking in proper sentiment, but I was tired and it was nearly lunch time.  I went to place the card in my cart and I turned it over to check the price.

I stuffed it back into its spot.  I grabbed my utterly inadequate 2nd choice.

These aren’t cards that talk and have speakers or cards that have elaborate pop outs.  They aren’t embellished in foil and they don’t have prose that would impress those among us who appreciate a clever rhyme or turn of phrase.

Dear husband, for the same price I could buy you a gallon of racing gas for your Camaro.  I could take you out for tacos.  With meat in them.  I could buy you most of that ballast thing you keep wanting for your garage light.  All things that would be more appreciated, I’m guessing, than a card that isn’t quite right and will eventually, most likely, rot in a landfill.

I left the store without a card for the husband, feeling like a failure, of course.  Feeling like the cheapest, most ungrateful, whining cancer wife on the planet.  Feeling like I had better start making the most spectacular homemade Valentine’s Day card ever.  Feeling like I should probably leave out the parts about the cat litter and the hearing specialist in my homemade card.  Feeling like rhyming is hard……..feeling like, maybe…. I need to go back to the store and have another look at those cards.

Ultimately, I left wondering if my dad ever looked at the price on the back of the card. 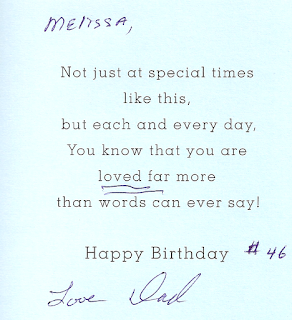 He crunched his eyebrows, lowered his face forward and sternly said, “I don’t want you to be writing one of your blogs about me.”

I had known him 5 minutes.  He had asked how I occupied my time.  After trying to rationalize what I did all day long I mentioned at the end, “Oh, and sometimes I write a blog.”

He was a little intimidating and I wasn’t sure I was going to like him.  I already knew however, that he was blogworthy.

I was not happy to be there.  My oncologist wanted me to mention “…any little post cancer treatment thing that might be bugging me, any little ache, pain or symptom.  Don’t leave anything out.”

She sent me to physical therapy.

I began to read that list of aches and pains and symptoms to my new physical therapist, complete with a dramatic introduction to my recent medical history when he sighed, put his hand up and stopped me from speaking.  Out of fear and self preservation I summarized my lengthy list in one and a half nervously delivered sentences-as he had immediately requested.

He told me I had the strongest hip muscles he’d seen in years.  I looked around at my elderly cohorts and hoped that was true.  He told me he was glad I had Asics shoes.  I told him my daughter found them on the clearance rack.  He told me he wasn’t a big fan of running.  I started to panic and wondered if I should find a new physical therapist.

He asked me if I wanted to go to the gym.  I said…..ummm…….no….not really.
He stared at me for longer than was comfortable, threw his head back and started laughing from his belly.  A sincere, authentic laugh it was.  “Finally!  Someone real!  Someone honest!” he boldly guffawed.

He would have been right, though. I was a cranky problem patient.  I was sick and tired of being broken.  I thought he might be a cranky physical therapist.  I was sure he was tired of people like me-people with lists, people who needed to explain things, people who wanted someone to listen.  He was unreserved, direct and decisive.  There wasn’t any warm and fuzzy.

Or so I thought.

He gave himself away near the end of my appointment.  He let it slip in between words like reps and deltoid.
“How’s your head?” he casually asked.  “That was the hardest part for me after my cancer.  After treatment is over you find your head is a little messed up.”

That was my secret.

He knew, because he had been there.

The receptionist was surprised I was willing to schedule my next appointment with him.  She said some people find him too direct and intimidating.

I told her he was going to work out just fine.
Posted by Melissa at 1:30 PM 2 comments: