"Has anybody seen the transmission?"

We have a car project at our house. When I say "we", I mean not me. Or the kids. When I say "car", I don't mean basic transportation. I mean a '69 Camaro drag racing car that has a name and is as much a part of the family as the pets are. When I say "project", I mean a significant negative drain on the bank account.

I received a call the other day. It was a message for my husband. Apparently, Dirty Dan the Tranny Man would be done working on the Camaro transmission in a few weeks. It would cost hundreds of dollars.

I had no idea the transmission was even out of the car.

It's not the first time my husband and I have been on two different pages concerning this car. At times I feel we are even speaking two different languages. I speak English. He speaks a mutated auto-geek, gearhead version of English. 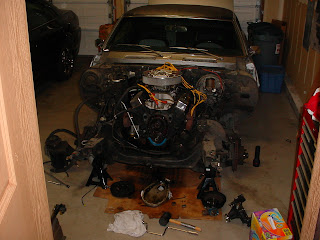 manifold connects the carb to the heads which are on top of the block. The rockers are on top of the heads. The main studs are on the bottom of the block. The quarters are in the back of the car. The tranny will be returned after we pay Dirty Dan the Tranny Man. Cash only, of course. My husband's dream is to cut a perfect light and finish the quarter mile race in 12.9 seconds with his newly restored sbc-which obviously means small block Chevy if you're a gearhead.

Wife English
My rear end is always a little too big and has it's own cellulite. The carb can either be whole wheat good or white bread bad. A jet is always an airplane. My intake is always connected to consuming too many carbs which my head said would taste even better with a little butter on top. A manifold seems like a dream since I have rarely had a man fold any laundry at my house. Rockers are on the top of the music charts. Olivia Newton John certainly thought John Travolta was a main stud in the movie Grease when she said, "Tell me about it, stud." Before I met my husband, the only thing I thought was on the block were the New Kids. Quarters are lost money underneath the seat of the car. Dirty Dan sounds like he should be on the FBI's 10 Most Wanted List with a $10,000 reward attached to his head. Cash only, of course. My dream is to have perfectly dimmed light during a romantic meal with my main stud of a husband where my intake of healthy carbs allows me to eventually have a smaller rear end. Oh, and during this romantic evening we won't talk at all about the letters sbc-which obviously mean sucks big cash, if you're a gearhead's wife.

Check This Out!
Justin Timberlake's song What Goes Around and accompanying video with Scarlett Johansson off of his most recent album "FutureSex/LoveSounds" will make you want to get up and dance.
Posted by Melissa at 7:54 AM