A Barbeque Took Me Down

Hi. My name is Melissa. I am a suburban soccer mom and it’s been 12 years since I’ve driven an SUV or had a Costco membership.

I have been known to walk, yes, I said walk, to the grocery store instead of driving the ¾ of a mile to get there. I have purchased and actually worn garments from the local second hand store-more than once. I admit to owning a dented and rusting compact car with 215,000 miles on it. I actually get out of the car to open the garage door instead of pushing a button. Even more shocking, is the fact that our garage is used to store our cars and not our extra stuff. I’ve already given away all of the unused stuff in our house. We borrow CD’s, DVD’s and books from the library instead of buying them. I’ve reused plastic baggies. I regularly make dinner… from scratch. I choose a parking spot far away from the store instead of circling around in search of a closer one. My family has one TV that is neither flat screen or plasma. We have one computer that was bought used a few years ago. My kids do not have a Nintendo or a Playstation. They have never owned shoes with wheels in the heels. We don’t have an iPod or a digital camera or a Blackberry. And most shocking of all, no one in my family has a cell phone.

I’m sure you can see that we probably are throwback freaks not yet fully embracing the 21st century. Yet, somehow, our friends and neighbors have managed to accept us and our eccentric, quirky behavior. They assumed it wasn’t a conscious choice but instead a temporary situation due to a lack of disposable income. They knew it wouldn’t be long until we would be able to embrace the bigger is better attitude. They would be patient and friendly and supportive until we got there.

But one day that all changed. We crossed a line. It wasn’t cute anymore. They found out we didn’t have a barbeque. 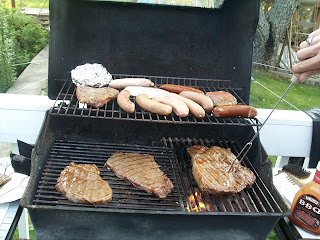 Here we were lacking current technology. We were lacking style and class and refinement. We were borderline geeky, granola, left wing liberals. And it was our lack of a barbeque that bothered them the most. They asked us what we ate if we didn’t have a barbeque. They said that it was “just plain wrong” to not own a barbeque. We were accused of being anti-American. It only got worse when I told them that we used to have a barbeque but I had gotten rid of it. Assimilating into society was serious business and we had failed. We were kicked out of the suburban club of excess. We were exposed for the imposters we had been all along. Our reputation was ruined. It wasn’t the cell phone. It wasn’t the Playstation. It wasn’t the rusting car. It was a barbeque. A barbeque took me down.

Check This Out!
The movie The House of Sand tells the lifelong story of a woman desperately trying to escape the isolating sand dunes of northern Brazil. Gorgeous movie. Gripping story. Subtitled. Rated R. Edit two scenes and it's a safe PG.
Posted by Melissa at 2:47 PM

Email ThisBlogThis!Share to TwitterShare to FacebookShare to Pinterest
Labels: barbeque

Very funny! Keep it up.