The frozen blueberry muffin sat on the counter for 20 minutes before I realized I no longer needed to live this way.  My lengthy, first world hardship was over.  Nearly instant gastronomic gratification was mine again.  After 20 minutes of course, the muffin was just about defrosted.   I ate it standing up in my kitchen, staring at my brand new microwave oven and wondered how many days would go by before I’d start using it.


On the day the microwave blew up, the boy developed an uncontrollable craving for popcorn.

The microwave had been misbehaving for quite some time.  Arcing and sparking and randomly scaring the living daylights out of me with its loud, eruptive caterwauling.  Unpredictable and infrequent, this behavior was easily ignored.  Tired of not being taken seriously, the microwave, at last, angrily threw its biggest fit ever-an epic, raging tantrum, spewing forth the most unpleasant smell as a final, emphatic exclamation point.


The normally handy husband briefly feigned interest in fixing the microwave but ultimately announced it permanently disabled.   My normally frugal self refused to allocate funds to replace an item so many people in history had managed to live quite well without.   And so for nearly a year I poured the Beefaroni into a saucepan and placed it on top of the stove. Leftover enchiladas were reheated in a baking dish in the oven.  I set my frozen English muffin out an hour before breakfast to defrost.  I’ve eaten one frozen microwave meal in those long months-it took me 45 minutes to cook in the oven on a cookie sheet.


And nearly once a week, someone mentioned how nice a little microwave popcorn would taste.

Santa brought me a microwave this year.  The normally handy husband installed it.  My normally frugal self was pleased Santa found a good sale.  And then it sat.  Unused. I stared at it while I ate my defrosted blueberry muffin and for so many days after that.  Finally, on movie night, the boy suggested we get some microwave popcorn.


We popped 4 bags of popcorn that night.  My new microwave and I, still unfamiliar with each other, managed to burn two of them to the point that not a single kernel was salvageable. The other two bags we shared.  4 out of 4 family members declared the popcorn “fine”.  There were leftovers.


The next morning I got up and set my frozen English muffin on the counter top to defrost. I told myself this would give me time to drink some coffee. I made oatmeal on the stove top.  I told myself it was almost as fast as the microwave and it was fun to stir.  For lunch I reheated leftover pizza in the oven.  I told myself I liked how the crust didn’t get soggy this way.  For dinner I baked potatoes for over an hour at 400 degrees.  I told myself I’d have plenty of time to prepare the toppings and help the kids with homework while they baked.


And that night I heard someone call out, “Hey, do we have any ice cream?”


My new favorite cookbook is How to Cook Everything-the basics by Mark Bittman.  If you only wanted to own one cookbook, this would be a great candidate.  If you want to own more than one cookbook, check out Mark Bittman’s other cookbooks. They are all fantastic. 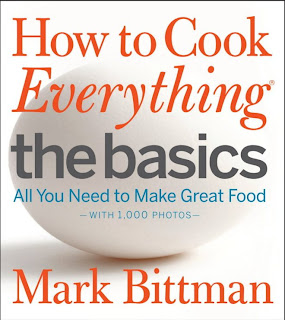 I LOVE LOVE LOVE Mark Bittman. I could NEVER live w/o my microwave though. I'd have replaced it the next day.

I went without a toaster once. It was hell.