It was Cinco de Mayo when the drunk man handed the boy a small Mexican flag and asked him when the train was going to leave.  The boy took the flag, looked over at me nervously and then told the drunk man that the train had already started moving.  The drunk man looked outside the windows, confused, and said,”Nooo!  This train is NAAAWT moving.  It’s the people outside that are moving, not the train. Right?”  The drunk man then turned around suddenly and commanded all those who could hear him, “Hey!  Stop with the Mexican jokes!  This is no time for Mexican jokes!”

The boy and I were lucky to find empty seats on the loud and crowded commuter train that would take us home. We were surrounded by boisterous, mostly intoxicated, mostly harmless soccer fans celebrating a victory.  It was the drunk man however, who took the final empty seat beside me.


He looked to the boy, seated across from us, still holding the Mexican flag.  His face lit up. “Hey, buddy!  Where’d you get that Mexican flag?  Did you know today is Cinco de Mayo?  Do you know the real reason for Cinco de Mayo?  Well, really, it’s an excuse for Americans to drink.”    The drunk man then lectured the boy and I on the history of Cinco de Mayo.  We also learned about his wife and his kids and his job and the biggest regrets of his life.

Across the aisle, a group of young men were debating what to draw on their friend who was “resting” with his eyes closed.  One put down a Sharpie marker and reached in his backpack.  He announced, “ZONE Bars!  These are my victory ZONE Bars!”  ZONE Bars were passed out to all.  The loud, young men were overly polite and offered unrestrained hellos to all who passed through our train car.  The man closest to the door was even kind enough to secretly drop a piece of ZONE Bar in every bag or purse that passed in front of him.  One member of the group chastised 3 kids who ran through the train.  “Where are your parents?  You are disturbing the nice people on this train!  Sit down and put on your seat bolts.”  Someone else yelled out, “Seat BOLTS!  You said BOLTS!”  And all the men laughed.  Someone in the group opened a beer he had hidden in his coat.  And all the men cheered.


The least rambunctious of the young men looked across the aisle and saw the boy, the drunk man and I staring at his group of friends.   He tried to hush his them, “Hey guys, hey guys, calm down a bit.  That lady over there--she’s clearly with child. You should really calm down.”


I turned around to find the pregnant person behind me.  There was no one there but me.

The drunk man next to me began asking me questions.  Did you like the soccer game?  Is that boy holding that Mexican flag your kid?  Where are you from?  Are you married?  For how long?  What do you do?


I told him that sometimes I write stories.


There was a pause and then he requested proudly,


Drunk Jose then turned to the boy and with much surprise asked him, “Hey buddy!  Where’d you get that Mexican flag?  I used to have one just like it.”

When the train pulled into our station, the boy and I stood up to leave.  Drunk Jose said it had been a pleasure.    And then he grabbed the boy by the arm and looked him in the eye. “You’re a good kid.  I can see that.  Don’t ever change that.  Ever.”


And with that the boy and I and a small Mexican flag departed the train.


As we walked off the platform I wondered out loud to the boy if our train ride was awful or hilarious.  I wondered if he was scarred for life.  And then I remembered those young punks across the aisle.


“Those drunk Zone Bar guys who kept yelling ‘seat bolt’-- I didn’t like them at all.”


The boy shook his head in confusion. “Why? What are you talking about?”


“They thought I was pregnant!   They said… ‘She is clearly with child.’”


The boy was dumbfounded. “They didn’t think you were pregnant!”  He said, shaking his head.  “They didn’t say ‘clearly with child’ they said you were, ‘here with her child’.  They were talking about me!”  The boy didn’t have much more to say to me after that.

The boy and I walked away from the train station in silence.  He waved his new Mexican flag.  I looked at my reflection in the store front windows trying to see if I really did look pregnant.  And somewhere further down the train tracks, drunk Jose, on his way home from a soccer game, was thoroughly enjoying a Zone Bar as he tried to remember where he left his Mexican flag.


At a loss as to what to recommend to you this time, the teenager has submitted her new favorite lip balm.  She is quite taken with Nivea- A Kiss of Smoothness Hydrating Lip Care SPF 4.  She declares it "the best Chapstick ever!”.  I agree, since she stole it from my purse. 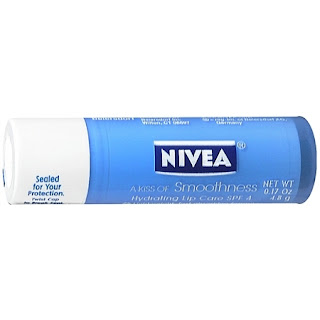 I'd comment but I need to change my underware. I just peed them from laughing so hard. sounds like quite a memorable trip.

Hahahaha I love cincodemayo. Almost as much as the other driniking holidays. Go jose.