It had really been quite a lovely hike until the boy jumped the stream. We were still over a mile from the parking lot when his knee landed on that boulder and the boy found himself unable to walk. The husband and the teenager and I took turns piggybacking him back to the car. The teenager soon became frustrated with her heavy and wiggling brother.

She turned to me and whined, “Can’t he walk on it for a little bit?” With great wisdom I scolded her, “Your brother is hurt and you are going to have to be patient with him. It might take some time for his knee to heal.”

Three weeks ago we found ourselves at a major league baseball game accompanied by the boy on crutches. 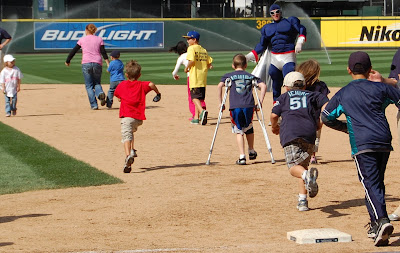 After the game, thousands of grinning children lined up to “run the bases” of the impressive field. When it was the boy’s turn to start running, he awkwardly dug his crutches into the pristine dirt and pushed off. I began to tear up as I watched him struggle around the bases with wobbly toddlers passing him on both the left and the right.

As he touched home plate with his crutch, the boy turned to me in frustration and complained. “That was hard. I wish I could walk on my leg.” With great wisdom I comforted him, “You are hurt honey, and you are going to have to be patient. It might take some time for your knee to heal.”

Two weeks ago we found ourselves at the doctor for a follow up visit. The boy had not been a compliant patient and I was intent on acquiring a more restrictive brace for his knee. The boy had been seen crutch racing, often forgot to wear his brace and had even fallen down the stairs. As a result, his knee was still swollen and was not improving. But the doctor did not give the boy a better brace. Instead, she told the boy that he needed to start walking on his injured leg and wean himself from his crutches.

I couldn’t possibly follow those doctor’s orders. I knew it was still quite painful for the boy to put any weight on his injured leg. With great wisdom I defiantly told the boy, “Don’t worry honey. I know that you are still hurt. We are just going to have to be patient. It looks like it’s going to take quite some time for your knee to heal.”

One week ago I found myself being questioned by the husband. “The boy starts school soon. He’s not going to still be on crutches, is he? Perhaps he should start putting some more weight on his leg.”

Shaking my head at the callousness of the husband I informed him that the boy was still in quite a lot of pain. I stated that the boy had already experienced enough pain and I would not force him to go through any more. With great wisdom I admonished the husband, “The boy is still hurt and we are just going to have to be patient. Apparently, it is going to take a long time for his knee to heal.”

Just a few days ago I found myself meeting the boy’s new soccer coach for the first time. I wanted to inform the coach that while the boy was currently injured, he did hope to play for his team a bit later in the season when his knee had healed.

And then he spoke.

He had a British accent. That accent not only cemented his stunning looks but I was sure it also made him smarter, kinder, and a better soccer coach.

The coach/Adonis questioned the boy about his knee and then offered a bit of advice. “You know buddy, you should start putting some weight on that leg. It will really speed up your recovery.”

“What happened to being patient? What happened to protecting the boy from pain? And why do you suddenly find it so important for the boy to play soccer this year?” the husband fired back at me.

“Oh come on!” I guiltily replied back. “The boy has been on those crutches long enough. It’s time for him to get better. Besides….I have a feeling it’s going to be a very, very good soccer season.”

The summer reading list here at Slightly Exaggerated included the monstrous book, Pillars of the Earth by Ken Follett. At nearly 1000 pages, it was by far one of the most all consuming books I’ve read in a long time. I could not stop reading about the building of an English cathedral in the 1100’s and the lives of the people involved in this great endeavor. In an effort to medicate a severe case of book withdrawal upon the completion of Pillars of the Earth, I also read its equally massive “sequel”, World Without End. World Without End takes place in the same cathedral town 200 years later and, surprisingly, I think I liked it even more than Pillars of the Earth. Don’t let the 1000 or 2000 pages deter you from what I found to be a wholeheartedly engrossing and entertaining read. I must warn you that both books are most definitely rated R. That being said however, I can’t recommend them highly enough.
Posted by Melissa at 12:00 PM

And the mama bear shall protect the baby bear......until Beckham Bear arrives, that is!

You are brave! You'll have to let me know if the soccer coach reads your post.

Yep.... I need his schedule, think I need to check out one of the "boys" soccer games. Have I told you I hate soccer! Never liked it when the girls played... but I think I could bust out and come watch one!
Your favorite cousin.....

I loved the book also, thank you for the recommendation but I totally hated Prior Phillip. I kept thinking he was the original monk incarnate - hypocrisy drives me to anger!! Breathe...breathe...and I know he had a good side too but he still made me so mad!

Glad you're back to tell some more stories. As usual, made me laugh....and wish my kid had a different coach!