Having been a mother for 14 years, 9 months and 2 days, I was quite confident in my ability to counsel the teenager. She was rather worried about marching in her first parade with the high school marching band. After carefully assessing the situation, I astutely determined that standard parental guidance was all that was required.

I began with the usual reassuring opening of, “Oh honey, it’s gonna be ok!” I peppered in a few small self esteem boosts discretely disguised as caring parental sympathy. I then went on to recite a few lesson filled idioms, followed by the typical thought provoking series of rhetorical questions and finally ended with the obligatory and always empathetic parental anecdote from my own marching band days.

And just for good measure, because this was her first high school event and it felt like some kind of milestone moment, I decided to add on the always effective parental guarantee. “So you see honey? I am absolutely sure that everything is going to be just fine. All you have to do is walk and play at the same time. I mean really…what’s the worst thing that could happen?”

When I first saw the teenager after the parade, she was most definitely unhappy. She approached me in her stocking feet. She carried her trumpet in one hand. In the other hand she carried her shoes. One shoe was covered in black electrical tape. The other shoe was in pieces. She held the shoes up, shook them at me and yelled, “I’ll tell you what’s the worst thing that could happen, mom…THIS! My shoes exploded! That is the worst thing that could happen!” 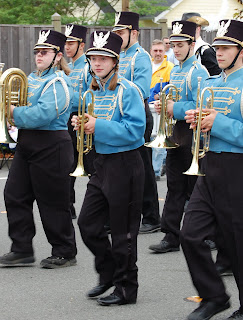 she left the sole of her shoe in the middle of the road. The brass section marched right over the sole, the flutes tried to step over it and the percussion section took turns kicking it around the road. The top part of the teenager's shoe now began to roll away from the side of her foot. Her left sock was marching on pavement.

A band helper managed to grab the sole from the middle of the road. She borrowed black electrical tape from a tow truck driver who was also in the parade. The teenager was unceremoniously pulled out of line and her sole was quickly taped back to the rest of the shoe. With the entire world watching, the teenager most conspicuously made her way back to her spot in the middle of the band.

And then the sole of her right shoe started flapping. And it flapped, awkwardly, until the last few yards of the parade when it too, fell off completely. Her right sock was marching on pavement. The temporary tape repair to the left shoe was beginning to fail. She took both shoes off and started the walk back to the car with her peers, who could all be heard muttering, “Did you see that somebody’s shoe exploded?”

And after marching in that memorable first parade, the teenager went home, put away her trumpet, and spent the next 3 days trying to get the splinters out of the bottoms of her feet.

Having been a mother for 14 years, 9 months and 3 days, I was quite confident in my ability to counsel the boy. He was rather worried about speaking in front of his class the next day. After carefully assessing the situation, I astutely determined that standard parental guidance was all that was required. I began with the usual reassuring opening of, “Oh honey, it’s gonna be ok!” and I ended with, “I mean really…what’s the worst thing that could happen?”

And then I went and took a good long look at his shoes.

In remembrance of Michael Jackson, I urge you to check out this video by Alien Ant Farm. Their version of Smooth Criminal, one of my favorite Michael Jackson songs, contains numerous references to many of Jackson's most famous videos and personal quirks. See if you can pick them all out.
Posted by Melissa at 12:52 PM

And that is a great song...RIP MJ.

Those are some cheap shoes. Try Gorilla Glue.

I never thought I was a huge Michael Jackson fan but after hearing all the songs again, maybe perhaps I was after all. That video is hilarious!

So sad!~ I shall think of this experience as I counsel my soon to be teen!
I will also try to contain my laughter. :-)