Lime Rickey, On the Rocks

When I arrived fashionably late it was clear that some women weren’t taking things slowly at all. A tall redhead with crazy wild eyes held on to a Green Dragon with both hands. A petite brunette kept pointing and laughing at the candy pink Sexy Rexy in her hands. I saw one older woman push her way through the crowd to the front. She forcefully asked the man behind the counter, “Do you have a double for me?”

The woman next to me couldn’t decide between getting a Sweet Rocket and going for the Many Happy Returns. “Oh, who am I kidding. “she said. “You know I’m gonna get both! I’m sooo bad!”

Two other women held on to each other as they pointed across the room. “I don’t know about you but I think it’s about time one of us went native!” They giggled loudly as they walked away.

I struck up a conversation with a man leaning on a table. “I never thought I’d get this lucky.” he beamed. “That lady just gave me an Ace of Diamonds. I hit the jackpot! Now I’m off to get some Sultan’s Water.”

The place was crowded and overwhelming. It was loud and busy and chaotic. It was full of people who were crazy and confident and full of character. They seemed to be having the time of their lives. They were throwing money around like they had just won the lottery. And I was pretty sure after hearing the word “labiatae” twice that some of them might have even been talking dirty. I was intimidated and uncomfortable. I knew that I didn’t fit in with these people.

But I didn’t say no. I took one look and I knew I had to have it. It was when I couldn’t say no to that gallon of Lime Rickey, that I knew I might have a problem. I tried to stop the grinning and the laughing and the money from flying out of my pockets. I was powerless. I was addicted. I really was a plant person-just like all of the other crazy people there.

After ultimately spending two hours at that arboretum plant sale, I went home to plant my own supply of labiatae in my herb garden and the double petunias in the front yard and the Lime Rickey heuchera in the rock garden. And I vowed that next year, I was going to get in line early. My new plant friends told me that you’ve got to show up early if you want to have a chance at getting some Aunt Eliza’s Rat Tail. Apparently, it sells out quickly every year.

When I arrived in the husband's family it was clear there was one woman who didn't take things slowly at all. I began to hear stories about this woman being struck by lightning and memorizing the bible and having something to do with runaway horses and buggies. Regular readers of this blog may remember a posting from January 8, 2009 about this same woman flying a Volkswagen over a snow bank.

Once in a great while, if you are lucky, you will meet a person who is larger than life. If you are really lucky she’ll share 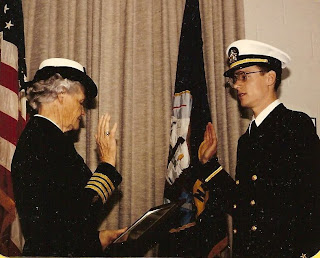 a Dr. Pepper with you and tell you some of her stories. The husband’s great aunt, Katherine “Kay” Keating,
passed away this week. She really was a larger than life person, full of more stories and fortitude and gumption than 10 men. The husband had the great honor of having her commission him as a United States Naval Officer. Because of Kay I learned that heaven really does exist underneath a lilac bush in the foothills of the Rockies. The teenager has learned, without one shred of doubt, that a woman can absolutely do whatever she sets her mind to. The boy has learned that barns are cool and mules are cool and falling on a barbed wire fence is definitely not cool.

I cannot encourage you enough to check out the link to Kay's obituary and a hometown editorial about her. She was quite a woman and she will be missed.
Posted by Melissa at 2:06 PM

That woman needs a book written about her!!

And a movie! She sounds amazing.

Thank you for leaving a wonderful tribute to such a dynamic woman. I believe that I would not be where I am in my life without her influence. This brought me to tears, but it is good. She left a strong legacy with our family. For a woman who never had children, she had so much influence.

Please let me come to your next arboretum sale! I will drink a lime rickey and buy one too! It really will be a crazy party!

Oh, and I read the obit on your relative....she sounds like one strong woman. I would have liked to have known her.

based in Bremerton said...

We navy chicks are tough...she was someone to look up to. Wish I coulda met her.

Plant people are crazy...plant sales the ultimate in craziness. Makes a Saturday night in a biker bar look tame.

You captured the essence of our awe inspiring Aunt. Being the first coolie laborer, I was honored to realize that Don was the last in the fine line of coolies on the ranch.