When he walked through the door, the boy had his head hung low. He tossed his baseball mitt on the closet floor and walked onto the living room carpet with his dirty cleats.

“How was your baseball game?” I asked him.

“We lost.” he told me. “I was up to bat in the bottom of the 9th. There were two outs. We were behind by one. Bases were loaded. I had a chance to tie the game and I didn’t do it.”

I began to counsel the boy on how striking out wasn’t the end of the world. It even happens to the best major leaguers.

“Oh I’m not upset about striking out.” he informed me. “That kid was pitching way too fast. He’s a 5th grader and I would have never been able to hit off of him. I was just hoping for an inside pitch. I leaned in as far as I could, hoping I would get hit. “

“What?” I cried out in surprise. “You were hoping to get hit?”


Two days later, the boy walked through the door with his head held high. He tossed his baseball mitt on the closet floor and walked onto the living room carpet with his dirty cleats.

“How was your baseball game? I asked him. 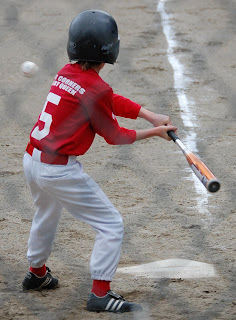 “We won!” he said with a smile on his face. “It was the greatest game ever! I got hit!”

”You mean that you got a hit?” I tried to clarify.

“No! I mean that I got hit by a pitch!” the boy answered excitedly. “Look at my elbow, mom. Doesn’t it look cool?”

The boy pulled up the sleeve of his shirt to reveal a swollen, bulbous, bruised elbow. He cringed when he tried to bend his arm. “Man, it kind of hurts.” he muttered, still grinning with pride.

After taking a deep breath I asked the boy. “Don’t you remember me telling you that you were not allowed to try and get hit by the ball? In fact, I think I specifically told you not to get hit at all. Did you try and jump out of the way?”

“Oh, mom, I didn’t have to try to get hit this time. The other pitcher was really bad. I even tried to get out of the way like you wanted... but I still got hit. How. Lucky. Was. That."

British web sensation Susan Boyle’s rendition of “I Dreamed a Dream” from Les Miserables has caused the Slightly Exaggerated family to become re-obsessed with the 10th anniversary Les Miserables concert that took place at Royal Albert Hall. Available on DVD and CD and easily accessible on You Tube it is the greatest music you will ever hear in your entire life. Period.
Posted by Melissa at 11:04 AM

have you checked out the highlights from Episodes 2 and 3 of Britain's Got Talent . . . 12 year old Shaheen Jafargholi and 10 year old Hollie Steel?

Ha. Very funny. That's some crazy backwards thinking though....and so much thought was put into his strategy...smart crazy boy you've got there.

I bow before the boy. He is a true baseball player. He was willing to take one for the team. He's earned my respect.