I was in a Hallmark store when I was forced to accept the truth. It was many years ago and we were living in an “I” state at the time….Idaho or Indiana…I can’t quite remember which one. The teenager was either in the womb or was a tiny baby. I can’t quite remember which one. I do, however, remember the exact moment in that Hallmark store when the cartoon rooster Foghorn Leghorn made an indelible impression upon me.

I was searching for the perfect greeting card. The husband was not interested in analyzing each one with me. He wandered off. A few aisles away an unsupervised child ran amok. This unattended child had unfortunately found the display of novelty alarm clocks. He then proceeded to try out the unique alarms on each of these clocks. One alarm was a chirping bird. Another was a barking dog. Another alarm sounded like a car alarm going off. I learned it was possible to be awoken by a mooing cow, a honking New York City taxi or a ship full of angry pirates. Apparently, one could also wake up to the sounds of a fire engine, a lawn mower or Barney the dinosaur announcing that it was, “Time to get up, for all my friends!” As the unsupervised child continued to sample each alarm clock, I grew more and more annoyed. Each alarm was more obnoxious than the last one and I was having a difficult time concentrating on my perfect card search. And where was that child’s mother? It was then that Foghorn Leghorn spoke to the entire Hallmark store louder than any of the other alarms had. His booming southern accent echoed throughout the store, “WELL I SAY, I SAY BOY! IT IS TIME TO GET UP! IT IS TIME TO GET UP!”

I could stand it no longer. I had to see what kind of ill-mannered, impolite child could be so ignorant of the unwelcome and continuing commotion he was causing in a public place. 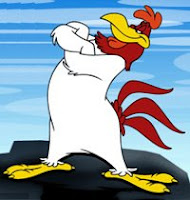 I marched myself to the end of the card section and turned the corner to walk up the alarm clock aisle. I saw him immediately. He was standing there with a plastic Foghorn Leghorn in his hands the size of a football and a grin on his face the size of hoagie sandwich.

And at that moment, right there in that Hallmark store, the truth became crystal clear to me. I knew, that in our family, I was not going to be the fun parent.

Over the years the husband has done many things to uphold his status as the fun parent. He pushed our kids higher on the swings and faster on the merry go round than I would have. At the water park he bypassed the slow winding waterslide in favor of the speed slide from hell.

He was the one that rode the roller coasters that flirted with death the minute the kids reached the allowable minimum height. He was the parent who sent the boy, who was only 4, careening on his bike down a huge hill only to watch him crash violently at the bottom. The husband is the one in all the family pictures with the children. I am the one who took the pictures of them while screaming”be careful!” The husband is the one who walks into a store with wet shoes and tries to make a squeaking noise on the linoleum floor as loud and long as he possibly can. While most parents worry about their teenager driving too fast, the husband is encouraging ours to take up drag racing.

Recently, our family visited the science museum. The kids and the husband were thrilled to find out there was a large reptile and amphibian show there that weekend. I however, can’t list a single reptile or amphibian in my top 10 list of favorite animals. I left the husband in charge of the children while I went to buy IMAX movie tickets. When I returned I found my children in the company of an extremely large “biker dude” dressed all in denim and leather and metallic studs. His hair was swept back in a loose pony tail revealing his matching stud earrings and colorful neck tattoo. His name was Slim. The teenager was sitting on his right knee and the boy was perched up against his left knee. His hands were resting on the shoulders of each child. On top of and wound around my precious babies, there was a 21 foot long, 310 pound anaconda boa constrictor snake. The beaming boy couldn’t contain himself. “Mom! Mom! Can you believe this? Slim let us hold his snake Fluffy!” Slim looked pleased, the children looked as happy as I had ever seen them and that awful snake looked very hungry. I don’t know who frightened me more-Slim or Fluffy.

I turned in horror to the husband and gave him “the look”. He grinned and shrugged his shoulders and said, “What? They’re fine. Slim said Fluffy wouldn’t hurt a fly.” And at that moment I knew that the lesson I had learned in that Hallmark store 14 or 15 years ago was still true. I was still not the fun parent.

And thank goodness the teenager and the boy have both of us.

The science fiction book Ender’s Game by Orson Scott Card comes highly recommended by the boy because you never know what is going to happen next. The teenager recommends the classic TV series Emergency! because Roy and Johnny are soooo brave…..sigh. The husband recommends the new Dodge Challenger because it looks cool and goes really fast. And I recommend leaving your child in a booster seat until they are 4ft 9 inches tall because it’s just safer that way.
Posted by Melissa at 10:45 AM

Oh my god, this had me in stitches! My mum has passed on the whole 'Push noise activating buttons' gene onto me, and it's worse when the noise comes from an aisle of teddys/soft toys at the toy shop. It seems to be the challenge that we have to have them all going off at the same time. Which is harder than it sounds!

Be grateful that you're not the fun parent at times, it does get tiring! Plus the dirty looks you would get from even less fun parents does stay in your mind. If you weren't fun at all, then I'm sure hubby wouldn't get away with half the stuff he does :)

Landed here via stumbleupon, and glad I did :)