From the bottom of the hole he stuck out his head .
“I think I’ve struck gold!” was all that he said.
"You did WHAT?" said the mother, filled with dread.
as she peered into the backyard.

“Our troubles are over! You can worry no more!
I’ve discovered treasure inside the earth’s core.
It was such a great plan for me to explore
the dirt in our backyard.”

Much to the horror of the mother inside,
it appeared the boy had gone outside
and with super great effort, he had tried
to dig a hole to China.

The yard was full of rock after rock.
The same was true for the entire block.
Trying to dig would bring such a shock
when your shovel would hit something hard.

Yet somehow the boy had managed to dig
a hole that was really shockingly big.
And now the boy was dancing a jig
and yelling about treasure below.

The boy showed the father the treasure location.
Then the father did dig with great frustration.
Soon the boy did experience great elation
as the gold was pulled from the ground.

The boy was most obviously quite delighted.
The father was even a bit excited.
The mother was then quickly invited
to see the treasure up close.

She looked out in the yard and became a bit stressed.
She saw dirt and mud and a very big mess.
She saw laundry that would put Oxyclean to the test
when she tried to get out the stains.

Then out on the lawn there arose such a clatter.
She sprang from the kitchen to see what was the matter
and heard in the backyard a ton of loud chatter
about the gold that came out of the ground.

The boy said “Look at the treasure I found!”
“Come see the gold that I pulled from the ground!”
The mother then turned herself around
to see the golden prize.

She could not believe what she saw with her eyes.
She honestly looked like she was surprised
when she saw that the special golden prize
was a dirty doorknob of brass.

There was a look of pure joy on the boy’s face.
“I will keep it forever in one special place.
Dad, will you build me a display case
so I can keep my doorknob safe?”

Now the mother did not want that thing in her house.
She saw visions of dirt on her floors and her blouse.
She turned and quietly said to her spouse,
“Why don’t we keep it outside?”

The boy was crushed and started to fume.
He wanted to keep it in his own room.
He then went and got a very small broom
and started to brush off the dirt.

He wet down a towel and cleaned that doorknob.
He actually did a very good job.
The mother’s head started to throb
at the thought of junk in her house.

But the boy loved the doorknob he found in the yard.
He was proud of himself for digging so hard.
His knob wasn’t junk despite being marred
and scratched and dented a bit.

So the bedroom is now where the doorknob does dwell.
This doorknob, named Fred, went to Show and Tell.
And the whole thing has gone remarkably well-
having Fred live in the house. 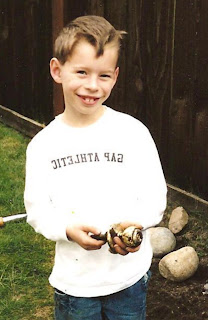 The mother is learning to chill out a bit.
She won’t be so picky. She won’t throw a fit.
She’s trying real hard to allow and permit
things that she doesn’t like.

The determined boy has set a new goal.
He wants more treasure from the dirt hole.
The mother has given up any control
when it comes to the boy and his dirt.

She has decided there‘s more in that ground
than just the doorknob the boy has found.
For sooner or later that boy is bound
to dig up some money or gems.

And when that day comes and you walk past her house
you just might see the mother with dirt on her blouse
being followed by dirty kids and a spouse
as she yells, “I think we’ve struck gold!”

Check This Out!
The young adult book, UGLIES by Scott Westerfeld, explores what happens when everybody gets to be supermodel gorgeous and your only job is to have a really great time. What could be wrong with that? (There are two sequels to this book, PRETTIES and SPECIALS.)
Posted by Melissa at 10:17 AM