There was no foreign financed wall to stop us from leaving Canada.

But there was a border agent with a badge, sitting in a small, grey booth in front of a fancy computer.

Our passports were taken.

The husband, the children and I stared at each other, wide eyed, while sitting on a bench inside a building that was presumably, the bastion of first world border security.  I whispered to the children, giddy and with a smile, that this was, “so exciting!”  I knew it would be an experience they would remember.

They were not amused and told me to be quiet.

We were surrounded by people who were there for random vehicle searches.  We watched them come in the building and attempt to explain why their hypertension medication was not in its original bottle.  We watched them explain their arrest from 1994 when they were 19 and careless.  We watched them worry about their fluffy white dog, waiting outside, who “never did anything to deserve this kind of treatment.”

We were not there for a random search.
We were there because of the husband.

The husband spoke to a border agent.  The husband was polite and respectful.  They asked him if he had ever been questioned before.  He tried to explain why he crossed the border with a bunch of long haired, pot smoking hippies in 1988.  They told him he had a common name. He casually mentioned his years of dedicated, patriotic, naval submarine service.

I cheerfully mentioned to the children that this adventure might be used in an essay for one of their classes this upcoming school year.

They were not amused and told me to be quiet.
They did not use their polite words.

I smiled and assured the reliable, patient husband that we’d be out of there in minutes. I made jokes about his “criminal past”.

The border agent stared at his computer, typed furiously, paused, and stared at the screen. He repeated this several times.  He grabbed a piece of paper that had just ejected from a printer and walked quickly to the back of the room.  He gathered all of the other border agents around. They looked at the paper and discussed super secret things about the husband.  They glanced back and forth toward our family.  After half an hour of this,  I turned my now nervous head toward the fidgety husband, cocked my head sideways and raised my eyebrows.  I made my skeptical eyes big and silently asked the husband, “Do you know what the heck they are talking about?”

He seemed unaware I was speaking to him.

Over an hour passed.
We were still being held captive.
All because of the husband and his dubious, hidden, unlawful identity.

I put on my strong woman, resilient, happy survivor face and told the children that, “We were lucky because not many people get to experience American border security at such an intimate level!”

They were not amused and told me to be quiet.
The did not use their polite words.
They seemed a bit angry with me.

I stared long and hard at the husband and began to fuel a senseless rage in my head, “Gosh darn it! We’ve been together for 31 years. I thought I knew him!  What has he done? What is he keeping from me?”

Our captivity had gone on long enough that I began to anxiously, wonder, way deep down, if my life with him had been one big lie.

The border agent eventually returned, explaining that he had cleared all the criminal activity associated with the husband’s common name. He apologized for keeping us for such along time, but there were some bad guys with the same name as the unblemished husband's name.  He wanted to make sure the husband would have no trouble in his future border crossings.

The husband was innocent.
We were free.

As we continued our drive toward home, I turned an ever-loving eye toward the reliable husband. I grasped his strong, steady hand and was grateful knowing that he hadn’t been hiding a serious criminal habit from me. 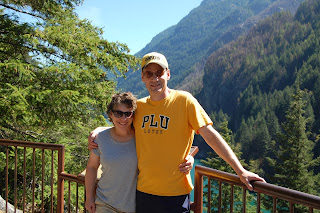 I said to the children, “Well, that was fun!  How many people get to experience that?!”
They were not amused and told me to be quiet.
The did not use their polite words.
They seemed a bit angry with me.

They asked me how long it would be until they could get wi-fi.
Posted by Melissa at 3:06 PM

That's...perhaps what they call a 'teachable moment'...(or at least a learnable moment?)
*sighs*
Very glad everything worked out fine.

You do know how to paint a picture with words! LOL You can make me laugh and you can move me to tears.
Thank you for sharing your talent.
I always look forward to your nexr adventure.
Take care!
(Jim's wife)