I was a wide eyed witness to the entire event.

I watched him callously shoot the man and then laugh about it.

I watched the man fall to the ground where he lay motionless. For a brief moment, the world stood still. And then I watched the man get right back up and point his gun toward me. I drew in a quick breath. My boy, with quick reflexes, and clearly competent, raised his controller and killed the man for a second time.

And again, the boy laughed.

I told the boy killing was no laughing matter. I lectured him on death and reality and video games and real blood. The boy assured me he would never laugh if he killed a real man. He told me he knew the difference between video games and real life. I said the game was a bad game. The boy said it was a fun game and thanked me again for buying it for him for Christmas.

The boy tried to teach me to play his video game. He showed me how to navigate the battle scene. I told him that I thought the architecture of the buildings was stunning. He showed me how to hide behind a large tree. I wondered what kind of tree it was and said it looked much healthier than the ones in my yard. He showed me how to pull the trigger and kill a man. I asked him if the man had a wife or a mother or life insurance.

The boy told me it wasn’t any fun playing video games with me. He said I needed to “just go with it” and stop talking so much.


It was clear the boy and I were on different pages.

I was eating my lunch, flipping through the channels when I found the TV show about video games. I learned about the most popular video games, the new releases and the exclusive secret tips that were guaranteed to improve my score. I knew I had found the answer. The boy and I would watch this show together. We would be on the same video game page. We would bond.

I beamed proudly when I sat next to the boy and turned on the show. The boy stared silently at the TV as the games were reviewed. I listened intently, trying to memorize the video game lingo. When it was time for the first commercial the announcer looked into the camera and spoke directly to my innocent boy. “Don’t you dare get off that couch. Don’t you dare change that channel. You absolutely aren’t going to want to miss what we have coming up next! We take a look at the absolute HOTTEST video game sex you have ever seen! I’m talking realistic, smokin’ hot babes here. So get yourselves ready and we’ll be back in 2 minutes.”

Practically frozen in place on the couch, I managed to slowly turn my head to look at the boy. I opened my mouth to speak. “Uuuummmm…..I…….”

The boy casually leaned forward and grabbed the remote. “Yeah…I got this.” He turned the TV off and got up off the couch. “Nice show, Mom. Nice show. I think I’m gonna go in the other room and play my video game-the one with the shooting and lots of pretend killing. That OK with you, Mom?”

My new favorite book is Restore. Recycle. Repurpose. With the subtitle. 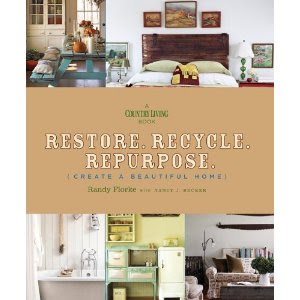 Create A Beatiful Home, this Country Living book by Randy Florke has tons of great pictures of every room in the home. Written from a "green" perspective, this book is full of old stuff, flea market finds and a whole bunch of really cool ideas. It's been super fun to peruse. You should check it out.
Posted by Melissa at 11:11 AM

That's the motto in our home. Killing is better than naked.

This was hilarious! You're such a good mom...or at least try to be!