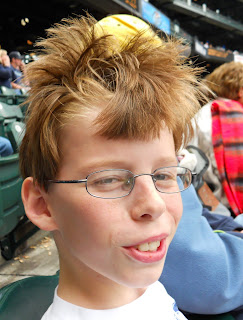 On this day however, the boy knew I would win. Today those cowlicks would be tamed, for today, was school picture day.

When he woke up on the morning of his school pictures the boy was already resigned to wearing an itchy collared shirt. He was not, however, happy about having his hair combed. The boy didn’t believe in combing his hair preferring instead to, “show the world my personality!” The two cowlicks the boy was born with guaranteed his hair would always have personality.

When I dropped the boy off at school that morning I had claimed victory over the cowlicks. The boy’s hair was combed and mother approved. I had a smile on my face as I proudly watched my handsome boy approach his group of friends. The boy spoke. His friends laughed and pointed at the boy’s head. I watched as the boy’s friend put both of his hands in the boy’s hair and ruined my hard won cowlick victory. I put on my angry face, put one hand on my hip and gestured at those boys with the wagging index finger on my other hand. The boy, half embarrassed and half annoyed, smoothed his hair down as his group of friends giggled. My cowlick victory was still intact.

It would not have been my choice to schedule the boy’s school pictures immediately after PE class. The boy ran hard in PE. The boy sweated. When the boy left PE his hair was no longer mother approved. The cowlicks had reasserted control and the boy’s personality was in full view. The experienced ladies helping the photographer took one look at the boy’s hair and knew it was not mother approved. They grabbed a comb and attacked the boy’s hair. The cowlicks fought back. The photographer called the boy’s name.


But, the comb was stuck.

And as the photographer called the boy’s name again he turned to find the boy’s sweaty hair, wound forever around a black plastic comb, the entire mess shooting straight up out of the boy’s head. The boy’s personality was shining in full glory. It was not mother approved.


“So, how were your school pictures?” I asked the boy when he arrived home from school.

“Oh they were great!” the boy said. “Except I had PE right beforehand and my hair got sweaty and messed up and those ladies tried to comb it and the comb got stuck in my hair and 6 people tried but none of them could get it out."

I instantly regretted purchasing the more expensive picture packet with those extra 5x7’s. It sounded as if the boy’s pictures were not going to be mother approved.

The boy continued, “But you don’t have to worry mom, I think my pictures will turn out ok. After those ladies cut the comb out of my hair, most of it didn’t stick up very far anymore!"

Stunned into silence by this hair cutting news, I realized I had no choice. I raised my white flag and surrendered, permanently, to the undeniable power of the cowlick.

A bunch of important publications named the novel, Await Your Reply by Dan Chaon, one of the best books of 2009. I couldn’t agree more. If you like mystery, suspense and plot twists, then this page turner is for you. I initially thought that Await Your Reply’s topic of identity theft sounded a bit dry. I was wrong. I couldn’t put the book down. So go make up a big pot of chili or a nice double recipe of casserole. Because your children will need to eat while you’re reading and you’re not going to want to stop and cook. Not that that happened to me…..ahem.
Posted by Melissa at 11:34 AM

haha...you know that you're going to have to post his school pic now...

I can't believe they cut his hair. I don't know if that is hilarious or criminal.

My mom forced me to have a military haircut when I was a kid. When I left home I grew my hair out found out she was right. I shaved it off. You can't win against the cowlick.

:) My mother finally surrendered to her genetically inherited cowlicks, and is pleased I barely inherited any. However, much to her chagrin, though my long keister-length-braids (which she rarely tried to tame) made it to picture hour at school, I decided that with bobby pins I'd brought, I wanted to put them up in round loops as I'd seen in a picture book (I think one of "Heidi"). I wound up with these floppy loops with the half-tail tops flying off my head, with the most mischievous grin, because I thought they'd be so beautiful! She thinks it's one of her favorite pictures -now-, but sure wasn't happy with me on the day they came home! Love your writing, Melissa!