Like any well intentioned, yet occasionally misguided mother, my only desire was to manufacture a memory for the teenager. Now, it’s true, had the incident actually come to fruition I would have had some regrets. At the time however, my only concern was for the teenager.


As we arrived early to the major league baseball stadium our backs were warmed by the midday sun. Our noses were awakened by the smell of those pungent garlic fries. And our eyes were widened by the sight of the great, green, pristine grass below. We blindly rushed, guided by a sea of experienced ball capped young fans, down to the seats along the first base line. The team was stretching, playing catch and taking batting practice. Not being a family prone to being star struck, we found ourselves to be quite unexpectedly so. They were very close, those players on TV, that the teenager yells at so intently. They were alive and real.


We could have touched them.

Except, that would have been frowned upon, I’m sure.


We had been to the major league baseball stadium last season, on “Kids Run the Bases Day”. The field was lined with security guards who periodically, and most authoritatively, yelled out, “Don’t touch the grass!” The boy was on crutches and 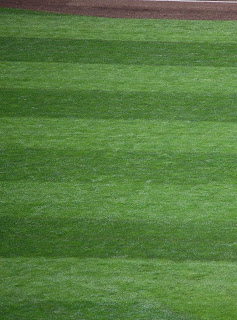 evoked much sympathy as he slowly attempted his round of the bags. The teenager, who also ran the bases, apparently did so with a longing we would hear about the entire off season.

“I really wish I had touched the grass.” she would randomly yell out in conversation.


On that sunny day this year, as we approached the field along that first base line, the teenager renewed her green grass desire. “I really, really want to touch the grass.”

Inexperienced in any sort of fan behavior, we watched as those around us confidently called out the players’ names. We had no collector pins on our hats. We possessed no Sharpie pen. We had not purchased an 8 x 10 glossy photo. And yet, armed with only the boy’s mitt and the teenager’s private baseball stats notebook, somehow, we looked as if we fit in. Because of course, we too, were star struck.

As we watched the players practice, the teenager muttered to me yet again, “I really want to touch the grass.”

Finally, the superstar 3rd baseman approached the sidelines. I slapped the boy on the back much harder than I had intended to and whispered loudly into his ear. “I want you to shove your mitt out there near him, and don’t you take it back until he signs it.” The boy looked up at me and seemed to question my aggressive suggestion. I glared at him with my best, “I said DO IT!!!” glare. “

I turned to the teenager and said, “I want you to shove your notebook out there near him and don’t you take it back until he signs it.” The teenager gazed right past my face and whispered to me, “Wow…he is so much better looking in person. And look, he gets to touch the grass. I really want to touch the grass.”

The security guard shadowing the 3rd baseman, as he signed autographs, was a delicate man who didn’t come close to filling out his official windbreaker. The man was slightly taller, by a few inches, than my stretched out height of 5 feet. I knew, without a doubt, however, that I weighed more than him. The teenager tugged on my sleeve and whined, again, in my ear, “Maaawwwwmmmm…..I really, really want to touch that grass!” I turned from my grass whining child back to the security guard and saw that he was picking the dirt out from underneath his fingernails.


And then it hit me.

I could take him.

The teenager would touch that grass.


I leaned into the teenager and whispered my plan. “Why don’t you just jump that wall real quick, run out and touch the grass, and then run back.”

The teenager’s eyes widened to their limit. “Mother! The security guard is RIGHT. THERE. HEL-LO!”

“Yeah, yeah…I’ve already thought about that. “ I whispered back. “I think I can take him. Besides, really, what’s the worst thing that will happen? “

When we left that baseball game that afternoon the boy was holding his mitt, newly signed by the superstar 3rd baseman. The shadowing security guard had taken off his too big windbreaker to reveal that he was composed entirely of hardened muscle fibers. And the teenager, having chastised me for my “stupid suggestion” that she jump the wall, left that game, again, without having touched the grass.


A few days later we watched on TV as a Philadelphia Phillies fan ran out on the field and was eventually tased. The teenager turned to me and said, “See mom! THAT’S the worst thing that could happen when you jump the wall.”

And then she longingly added, “But at least he got to touch the grass….”

The Slightly Exaggerated family just finished watching the wonderful movie, Hachiko: A Dog’s Story and recommend it wholeheartedly. Ok…perhaps…the most hardened and disillusioned of you will find it a bit sappy. But that is all the more reason for you to watch it as well.
Posted by Melissa at 3:33 PM

I touched the grass once.

They asked me to leave and not come back that season.

It was totally worth it.

I won't be leaving my name.

I've watched that movie. It really was a good one.

This was funny. Who knows what will happen when the mother bear instinct takes over?

I'm sure many have said this before when reading your stuff. I know I have. You should be published. Plain and simple.

Keep it up. I'll be checking in.