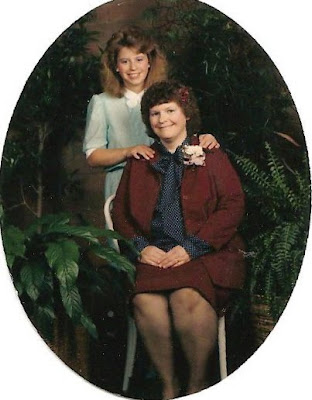 Awww dang it, you didn't tell me I'd need Kleenex!

you are too sweet!! and you actually posted a picture of your featherd hair... you are a brave woman!

Ahhhhh....I totally remember that picture! I am sure your Mother is proudly smiling down from heaven today...one proud Mother of her daughter!

That was very touching! thank you for sharing with us!

That was really good. I'd write more but I need to go call my mom.

I hope this comes out the right way, but I must say, that you totally rock the "death blog". Every one that you've done on this topic has been amazing. You have a real gift of touching people and making it real and meaningful without resorting to sad, pathetic, wallowing.

Now, I must go call my mom too.

My mom died 12 years ago and I can tell you that you will never "get over it".

How great it is that you have adopted some of her traits! Now when you miss her you can just look in the mirror!

I can't go call my mom like the last commenters but I will be looking at some old photo albums tonight.